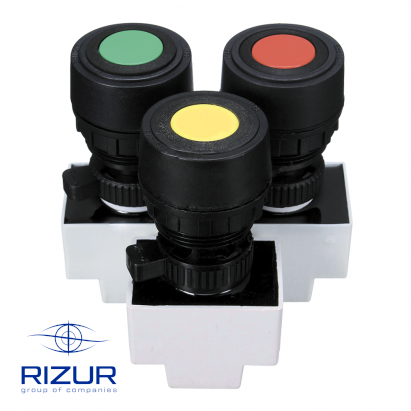 Explosion-proof switches RIZUR-KV with a rocker or rotating mechanism are designed for improving the reliability of the electrical equipment communication, as well as for commutation, safety shutdown and protection against the extra current in the low-voltage circuits in the hazardous areas.

Explosion-proof semi-conductive LED indicators RIZUR-SI are designed for the indication of the state of the electrical drives and connected electrical devices with them, as well as other electrotechnical equipment by means of AC or DC current supply to the voltage indicator. Depending on the tasks, indicators of red, green or yellow colour are used.


Description Characteristics Gallery Files
Control/monitor devices RIZUR-KUU (stands RIZUR-KUUP, enclosures RIZUR-KUUSH, modular units RIZUR-KUUM) are designed for the use in hazardous areas and are implemented for the installation of operating and control elements, as well as signaling and other electrotechnical and electronic components of power distribution and conversion.