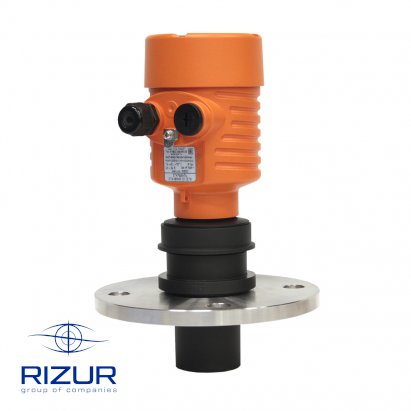 Device from the last-generation of non-contact radar level transmitters of RIZUR-2090 series. RIZUR-2090 – is an ultrasonic non-contact level meter designed for of liquids and solids level in open or closed reservoirs, including those under pressure, located at the technological facilities of industrial objects in chemical, petrochemical, medical, food, and other branches of the industry. RIZUR-2090 can also be used as an indicator of presence/absence of liquids in the controlled volume at a previously set level.

Intended use and application area

Non-contact ultrasonic radar level meter RIZUR-2090 is designed for level measurement and indication of various liquid and solid media. RIZUR-2090 is used in both open and closed tanks, including those under pressure, in process units at chemical, petrochemical, oil and gas, pharmaceutical, food, and other branches of the industry. RIZUR-2090 is suitable for operation in explosion-hazardous areas where there's a chance of explosive mixtures of gas/steam and air appearing.

RIZUR-2090 does not touch the controlled media and therefore can be used for polluted media, as well as for operation with media that require particular sanitary conditions.

This level meter's operation is not affected by the changing in controlled media parameters, such as density, electric conductivity, temperature, pressure, viscosity.

RIZUR-2090 is a mono-block construction. The housing and the lid are manufactured from an aluminum alloy by a casting method. Under the lid there's an indicator and an electronic unit with terminals for connection of the cable that enters the housing through a cable gland with a stuffing-box seal.

The level meter is hermetically mounted to the object with a flange (additionally sealed with a stuffing-box seal) or a nozzle.

Level meter operating principle is based on the measuring the time it takes for the signal from an electronic unit to reach the reflecting surface and return. The electronic unit produces an ultrasonic sound in the direction of the controlled media which is then reflected and received by the electronic unit that measures the signal transmission time and transforms it into an output signal within the range of 4 to 20 mA.